Sign up to our newsletter and be the first to receive the Weekly Perspectives newsletter delivered directly to your email inbox.

Here is your weekly newsletter — perspectives on trading and financial markets.

The employment report on Friday came out as bad as expected – 14.7% of the American workforce is now unemployed.

This interesting chart from Andrew Van Dam shows that this is the highest unemployment rate since the Great Depression.

By all appearances 14.7% unemployment can’t be good for the economy, and most people would think that the stock market would be struggling in the face of such a number. 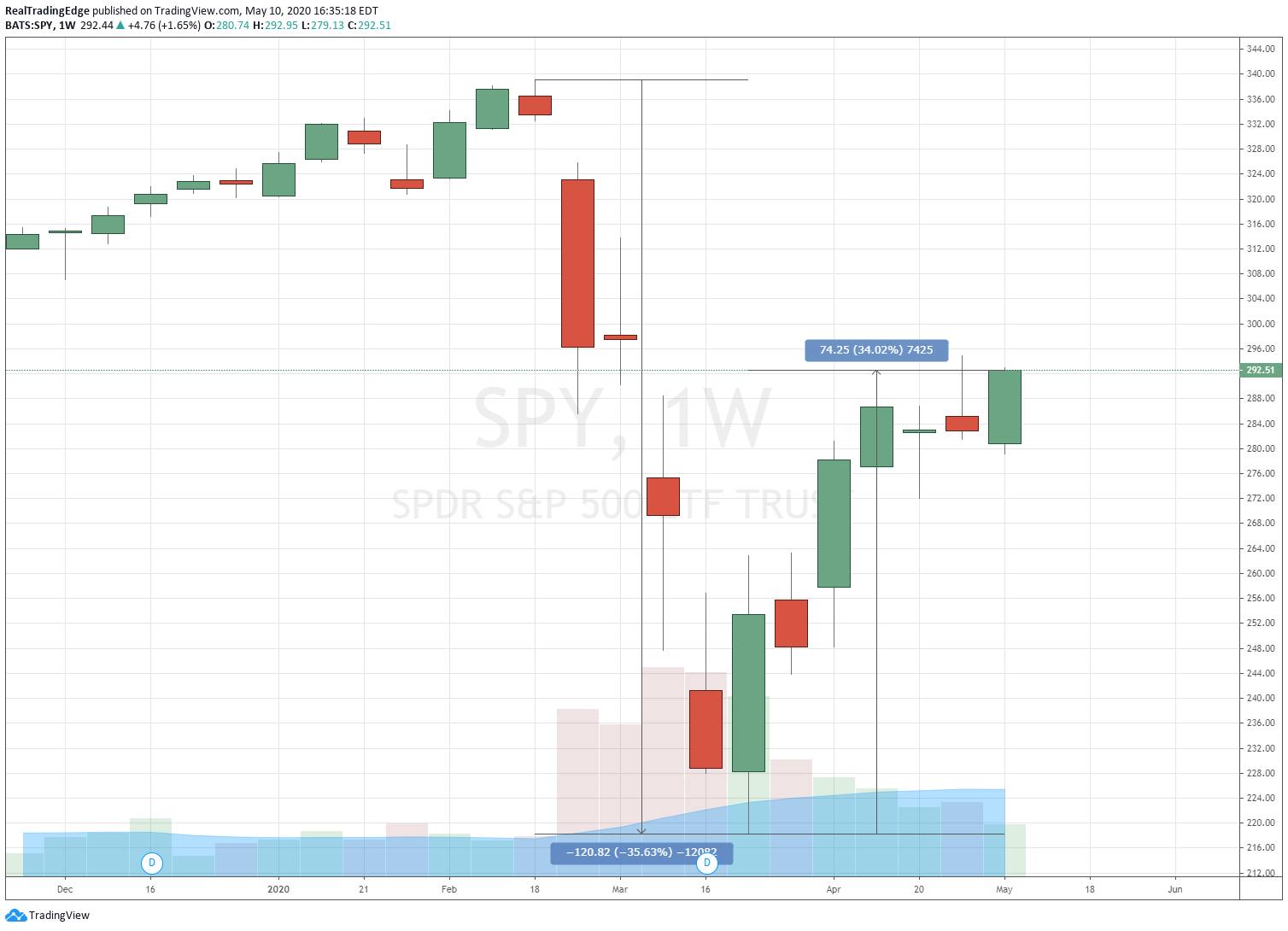 But the SPY has now risen over 34% in the 33 trading days since the March 23rd bottom.

Outsized declines and outsized rallies could very well persist for many months, if not years, to come.

Being able to remain nimble, open-minded, and adaptive to changing conditions may be more important over the next several years than it has been for a long time.

The Cognitive Dissonance Between The Economy + Stock Market –

Last week I posted the following –

“That being said the week ended with all the indices posting shooting stars so the short-term weakness could continue however so long as the higher timeframe remains up expect to see dip buyers in full force.”

What we saw this week were the North American indices opening up with a gap to the downside only to be met by a rush of buy orders as the buyers quickly overwhelmed the sellers then proceeded to rally for the rest of the week recouping all of last week’s losses and then some.

The markets are now trending strongly to the upside and by all appearances, the markets appear to be heading back to all-time highs with the QQQ’s just 5.5% away from those recent ATH’s.

In this trading environment, we’re seeing a real cognitive dissonance between what is happening with the real economy and the stock market.

The stock market has been on a major bull run even though most businesses in North America remain closed. Cynical investors may wonder why we even need businesses to re-open?

In this week’s video I discuss:

Now watch this week’s Weekly Outlook video to see the setups and levels we’ll be watching as well as the technical outlook for the VXX SPY QQQ IWM DIA EEM TSX TLT GLD MGC BTCUSD EEM and more for the week of Weekly Market Outlook For – May 11 – 15, 2020.

What Happens to Stocks After a Big Up Month?

Interesting stats from A Wealth of Common Sense showing that 13 out of the 20 biggest up months occurred just before, during, or in the aftermath of the Great Depression.

One hard part about investing during such highly volatile periods is you can talk yourself into just about any scenario.

Sometimes these huge bounces are the real thing. Other times they’re a mirage.

One of the things I’ve learned from studying historical downtrends and volatile markets is they tend to open you up to a wider range of outcomes, both to the downside and the upside.

Is the forced selling in Archegos related names over?

by editor time to read: 3 min

Trading Weekly Market Outlook For May 11 – 15 –…
0
×
Sign up for our weekly newsletter
Stay up to date with the podcast, and get notified when the next podcast drops.